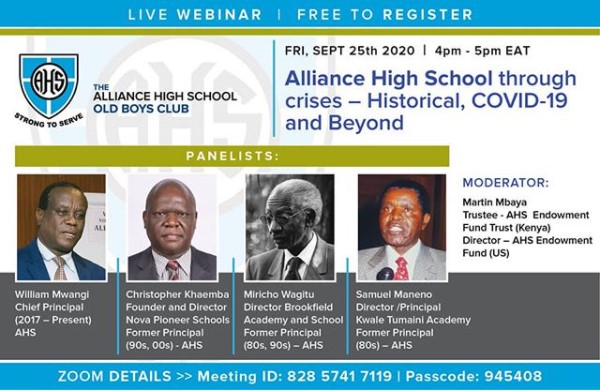 The Alliance High School Old Boys Club hosted a former principal’s webinar whose theme was “Alliance High School through the Crises – Historical, COVID-19 and Beyond” on September 25, 2020. The webinar panelists featured the following previous principals of AHS: Mr. Christopher Khaemba, Mr. Miricho Wagitu and Mr. Samuel Maneno, as well as the current chief principal, Mr. William Mwangi. The webinar was moderated by Martin Mbaya, Trustee of the AHS Endowment Fund (Kenya) and also the Director of the AHS Endowment Fund (US), and had over 100 people in attendance.

In the first portion of the webinar, the former principals, along with the current principal of AHS, reflected on the crises they faced during their tenure and how they were able to overcome them.

Mr. Maneno, Director/Principal of Tumaini Academy and Former principal of AHS (the 80s), recalls that the biggest crisis he had to deal with was when he had to defend the O level and A level results. After an article was published insinuating that AHS results were favoured. “It was a near miss experience” recalls Mr Maneno as the situation landed him in a hot seat when he had to explain himself to the ministry of education.

Mr. Wagitu, Director of Brookfield Academy and former Principal of AHS (the 80s, 90s), recalled a situation where some of the Muslim students walked out of the chapel. It was after the Chapel Speaker, who was introduced by the Headmaster, upset the Muslim students. “Here are two issues”, says Mr Wagitu, “the religious issue and the discipline issue and to balance the two was a headache for me”. Mr Wagitu sat down with the board of directors and was able to set aside Muslim students from the chapel by the next term.

Mr. Khaemba, Director/Founder of Nova Pioneer Schools and former principal of AHS (the 90s,00s), noted that the biggest crisis he had to overcome was the 2007 election disputes. He recalls how some of the students of AHS experienced the ethnic clashes first hand. “Some of them had to move out of their homes”, notes Mr Khaemba. The ethnic clashes not only affected the students but the teaching staff too, as some would receive threatening messages. Mr Khaemba recalls how he had to devise a two-month program that sought to counsel, support and assist the boys once they returned onto school grounds. Through the program, Mr Khaemba was able to re-orient them and remind them of the school values that were negated by the ethnic clashes.

For Mr. Mwangi, the current chief principal of AHS, he notes that he joined the school at the time of crisis. He was facing the issue of old traditions vs changes. “I was dealing with old traditions, dealing with a school with the best name in the country”, says Mr. Mwangi. After three weeks of analysing the situation at the school, Mr. Mwangi had to make some changes that would interfere with the status quo of the school. It was not an easy process for him, but he had to make the changes. “The government was behind me, the board was behind me, therefore I knew I had to make it,” says Mr Mwangi.

“Running a private school has not been easy”, notes Mr Maneno. When the government decided to close schools, Mr Maneno notes that it left his school, Tumaini Academy “naked” as the livelihoods the staff depended on was no more. Mr Maneno notes that due to the COVID-19 pandemic, there has been a lot of uncertainty, even if schools resume as some students may have relocated. Parents might not support re-opening of schools.

“This is the worst crisis I have ever known in education, where its not just Kenya but the whole world.” notes Mr Wagitu. “People went thinking they would be back soon, now it has been several months”. Mr Wagitu believes that Kenya could have done better in trying to ensure that students remain in the atmosphere of learning. He notes that the biggest challenge schools in Kenya will have to face returning the minds of students to learning once resumption of physical classes begins.

For Mr Khaemba, he notes a positive outlook towards online classes in Nova Pioneer. He adds that for Nova Pioneer Schools, it was easy to re-orient students to online learning. However, the biggest challenge for the schools during the COVID-19 period has been gaining a full appreciation for online learning from the parents.

Mr. Mwangi echoed the sentiments of Mr. Wagitu noting that the pandemic has done a lot of damage. Once learning resumes, they would get back disorientated students in schools. “It has not going to be a bed of roses for us”, says Mr. Mwangi as he adds that for AHS to achieve social distancing, they would need an additional 54 classrooms. Online classes have also been a challenge for AHS due to lack of infrastructures to reach all students and ensure all can access classes.

A vision for the future

As the principals’ webinar came to a close, the former principals, along with the current chief principal of AHS, described what their visions they had for the future of education.

In his closing remarks, Mr. Maneno expressed his dissatisfaction with the lack of government support for private schools during the pandemic. He adds that the government could have slotted part of the COVID-19 funds to help private schools amidst the pandemic as they are an important part of the education system in Kenya. He posed the question, “Can most of the private schools manage without the government’s assistance?” to the audience. He concludes, with the hope that we will look back at COVID-19 and see that as a country, we did our best with it.

Mr. Wagitu’s vision of the future is the government coming in to help private schools during the ongoing pandemic. “COVID-19 may not go out in one go, therefore we need to learn from one another and support one another”, adds Mr. Wagitu. He observes that the government or other private entities can support private schools achieve social distancing in schools by taking in more students to prevent overcrowding in public schools.

Mr. Khaemba envisions a different future for the education sector in Kenya. He hopes that education will not only prepare students but produce students who will be able to tackle the problems of tomorrow. He hopes that schools can emphasize the importance of technology as a field in the job market that is instrumental in helping solve problems.

Mr. Mwangi’s vision for the future of Alliance High School is to encourage and foster good traditions and commitment among future generations. It will ensure that AHS continues to uphold its good name. He further notes the importance of the support of the AHS old boys in helping the school amidst the pandemic. Mr. Mwangi concluded by appealing to the AHS old boys and the AHS community to do all they can to help the school overcome the challenges of COVID-19.